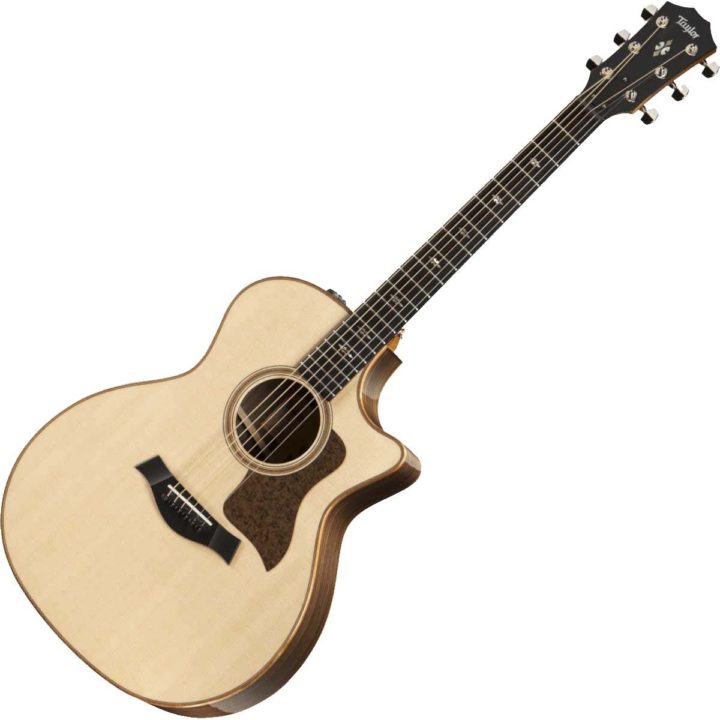 Here we have the brilliant 714ce but with the new “V Class” bracing. It has a very similar spec to the 814ce-dlx but considerably cheaper… is it for you? It certainly sounds different to other guitars, and the sustain is noticeable. Trouble is when comparing Taylor to Taylor you are comparing the best with the best. Here at Guitar Mania we think any Taylor will beat the competition pound for pound, and in particular Jon thinks this is just about Taylors BEST SOUNDING guitar. Chris still has a soft spot for the 814ce-dlx and Builders Edition. That’s the beauty of guitars Taylor guitars though, there’s one here for YOU ! Come and “Find Your Fit” as Taylor say.

A versatile instrument suitable for a range of musical applications, the Grand Auditorium 714ce boasts a rich and dynamic voice. The Lutz spruce top responds with the sonic power and headroom of old-growth Adirondack spruce, with an extra splash of warmth across the tonal spectrum. Together with Taylor’s patented V-Class bracing scheme and solid Indian rosewood back and sides, this guitar resonates with spectacular power, clarity and sustain. One of the most inspiring attributes of the bracing architecture is the noticeably enhanced in-tuneness of the notes, with more harmonic agreement among chords and extra girth in upper-register notes. The result is a balanced, textured sound that’s rich in tonal nuance with enough dynamic range to support hard hitters and soft pickers alike. Aesthetically, the 714ce sports an aesthetic that balances rootsy and refined elements, featuring wood-rich details like koa binding, a herringbone-style Douglas fir/maple rosette, and bias-cut Douglas fir top trim, along with abalone Reflections fretboard and peghead inlays and a “weathered brown” pickguard. The guitar ships with ES2 electronics in a deluxe hardshell case.

Bracing is the internal framework of an acoustic guitar that helps shape its sound. Although X-bracing has been standard in acoustic guitars for over a century, it creates an innate conflict between two key elements of a guitar’s sound: volume and sustain. The guitar’s top (its soundboard) contributes to both. The flexibility of the top generates volume (projection), while its stiffness generates sustain. And with X-braced guitar tops, here’s where the trade-off comes in: when something is made stiffer, its flexibility is reduced (and vice versa).

V-Class bracing changes all that. With Taylor’s V-Class bracing, an acoustic guitar top can be both stiff and flexible — for more volume and sustain. V-Class bracing provides stiffness parallel to the strings for more rigidity and hence sustain. Flexibility on either side generates the air movement necessary for robust projection. It’s the best of both worlds. This groundbreaking innovation also improves intonation; not only producing notes that are louder and with longer sustain — but more in tune with each other.