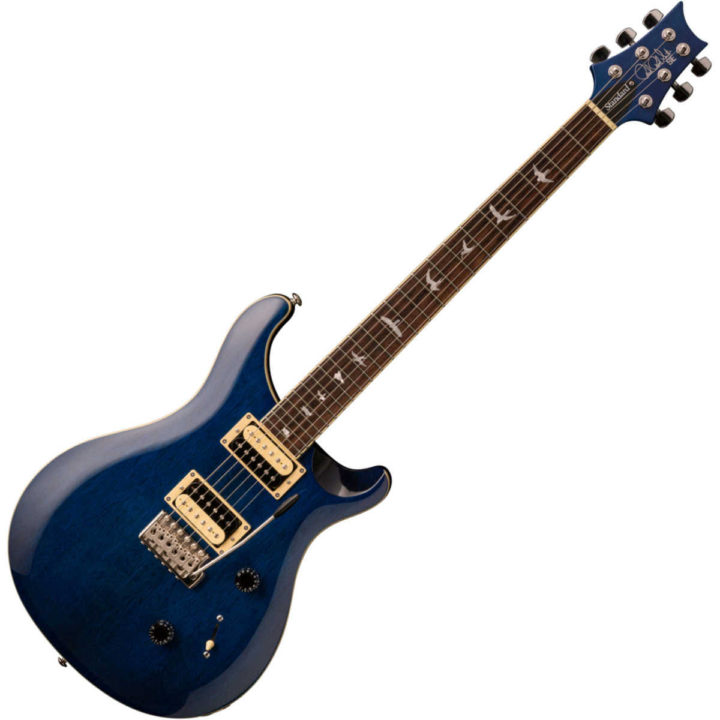 Just fantastic value. It really is remarkable for the money. To be able to own a PRS guitar at this money is just amazing. But why do we think it’s so good…?
The spec is pretty impressive but most of all it’s the FEEL. How the guitar feels in your hands. It certainly doesn’t feel like a £3000 USA made guitar, but it does feel better than any other guitar in this price range. However, guitars are very personal, and so much more than just feel and tone etc, but if those things are important to you then we would reommend trying this out.

Let’s tell you what the jargon means on the PRS SE Standard 24 Guitar in Trans Blue…:

PRS – Paul Reed Smith simply the BEST quality electric guitars for the money.
SE – Designed by PRS but Made in Korea to a very high quality
Standard 24 – The iconic PRS design, 24 frets, double cutaway body shape and ‘Bird’ fret inlays.
Trans Blue – that just refers to the colour in this case a transparent blue finish
NOTE: photo for refernce only, wood grain will vary from guitar to guitar and no two guitars are identical.

Info from PRS:
Perfect as a first guitar or the last guitar you’ll ever need, the PRS SE Standard 24 faithfully recreates the foundational design of the Custom 24, PRS’s flagship model, with all-mahogany body construction. This guitar features classic PRS appointments, including a 24-fret maple neck, rosewood fretboard with bird inlays, 85/15 “S” pickups, and the PRS patented molded tremolo, resulting in a guitar that handles well and sounds as good plugged straight into an amp as it does run through a pedal board.

The SE Standard 24 is a modern instrument with a powerful voice for players who demand a rock-solid, reliable guitar.

“With so many aspiring players struggling to stick with guitar past the first year, we knew we wanted to deliver an affordable quality guitar that players didn’t have to fight. We want the guitar to inspire you to play; it can’t be something you have to worry about staying in tune or simply working right. So while the [SE] Standards are our first foray into the below $500 price point, that doesn’t mean we compromised on tone, versatility, playability, or reliability,” said Jack Higginbotham, COO, PRS Guitars. “We’re very proud to offer these guitars to the world.”