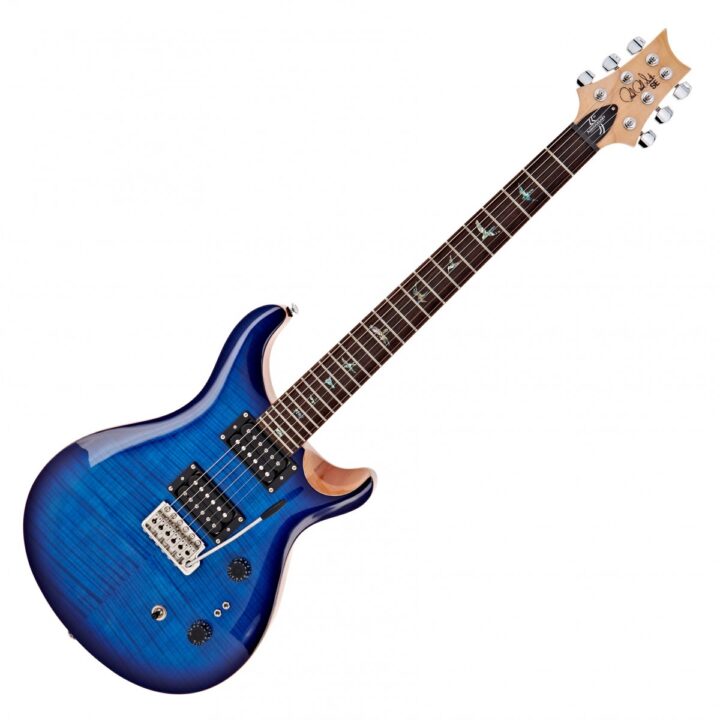 Let’s tell you what the jargon means on the PRS SE Custom 24 35 th Anniversary Guitar…:

PRS – Paul Reed Smith simply the BEST quality electric guitars for the money.
SE – Designed by PRS but Made in Korea to a very high quality
Custom 24 – The iconic PRS design, 24 frets, double cutaway body shape and ‘Bird’ fret inlays.
Sapphire Smokeburst  – that just refers to the colour
Comes with a deluxe padded gig bag.
NOTE: photo for refernce only, wood grain will vary from guitar to guitar and no two guitars are identical.

In keeping with tradition, the SE Custom 24 features the quintessential double body cutaway profile. Thanks to this open shape, you have complete access to all the frets the neck has to offer. The body top is constructed from maple and also has a maple veneer which adds to its appearance as well as protecting its colour finish. Mahogany is chosen to construct the back which works extremely well with the maple top for a top tonewood partnership.
Neck

The 25 inch scale length SE Custom 24 is fitted with a smooth maple neck. The neck is shaped to a wide thin profile which is particularly suited to fast players and lead guitarists. The neck is then topped with a rosewood fingerboard which is home to 24 frets. The opulent bird inlays decorate the frets as a guide and can always be recognised as a PRS trademark.
Upgraded Pickups

The SE Custom 24 is fitted with a pair of upgraded humbucker pickups which have been specifically voiced by Paul Reed Smith to accurately mimic the sound of pickups found in core PRS models. The tone you hear from the guitar is second to none. The updated 85/15 “S” pickups produce sweet highs that chime so beautifully. The low and midrange notes are clear and defined, offering you an extensive range of tones to explore. The 85/15 “S” dual humbuckers are often sought after and it’s easy to see why, plus they only appear in core PRS guitars and cannot be sourced otherwise.

There is a 3-way pickup switch blade which allows you to easily flick between pickup combinations to suit your playing needs. Simple controls for Volume and Tone facilitate sound tweaking whether you’re recording or performing live.