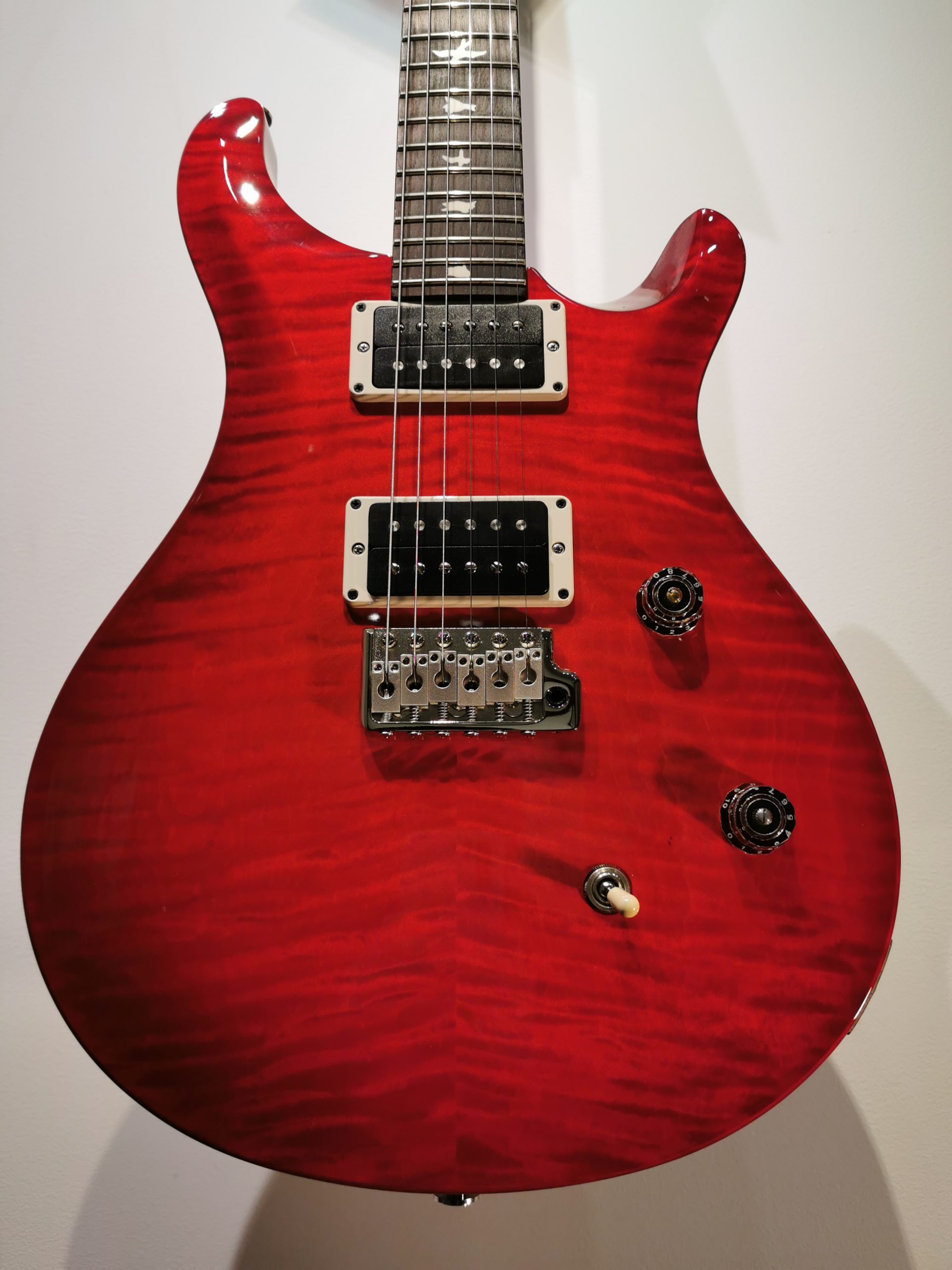 On ALL orders over £100 to mainland England, Wales & Scottish Lowlands (excluding Amplifiers)

Decoding the title:
PRS – Paul Reed Smith, the manufacturer
CE24 – the model type. This design features a bolt-on 24 fret neck
Scarlet, that’s the fancy name for the colour
Gloss – a gloss finish rather than satin
Pattern Thin Neck – that’s just what PRS call this specific shape of the neck, other shapes available.
85/15 – These are the pickups.

Summary (Chris says..):
Wow, yet another beauty!! And such great value. This one features a bolt on neck for those that want to save a few hundred quid and prefer a maple neck with Rosewood fingerboard. Love the new gloss body. Sadly my photographic skills can’t do this guitar justice, it’s a real stunner. Being 100% honest I personally think PRS are excellent value. Every single aspect of this guitar seems to have been precision engineered and well thought out right down to the screws that hold the back plate in. We love servicing these guitars too because they are such a joy to work on. Truly solidly built to last (My personal guitar is a PRS Custom 22 from 2005 and it still feels like new). Tone is rich, yet powerful with bags of sustain. Tuning stability is great and by great I mean way better than other mahogany bodied USA made guitars! The 5 way switch gives you instant access to a wealth of tone – from classic funky American single coil tones, to classic American fat seering humbucking tones.
Every single member of Guitar Mania currently has at least one PRS guitar, some have sevreal. Just about every member of staff that has ever worked at Guitar Mania has owned a PRS too – as soon as you play one you’ll want one, and there’s so many at so many diferent price points that we’re sure there’s one that will suit you.
Supplied with PRS gig bag.

MORE INFO:
Since the dawn of rock and roll, the snap and response that comes from a bolt-on neck guitar has been an essential part of the mix. These attributes have, in turn, become essential to many players trying to tell their story through music. The CE 24 pairs PRS’s traditional body combination of the mahogany back and maple top with a bolt-on maple neck and rosewood fretboard. The neck sports a Pattern Thin carve and satin nitro finish for a natural, addictive feel. To further maximize the guitar’s inherent tone and clarity, the CE 24 features PRS 85/15 pickups, which Paul designed to have remarkable clarity as well as extended high and low end. The electronics consist of a volume and push/pull tone control with 3-way toggle switch for a total of six classic sounds.

The original CE was introduced in 1988 and offered players PRS design and quality with the added snap and sparkle of traditional bolt-on guitars.

Additional information
Site by Azera Technology
Join Waitlist We will inform you when the product arrives in stock. Just leave your valid email address below.